Chart Of The Day: The Bullish Case For Oil

Chart Of The Day: The Bullish Case For Oil

Oil is falling on the news that U.S. President Donald Trump's hawkish National Security Adviser John Bolton has been sacked. This is seen as dampening military risk, which in turn pushes down oil prices. However, there's another view that sees dwindling U.S. stockpiles and shale production, compounded by improving U.S.-China trade relations, as very likely to boost oil prices.

In terms of U.S. production, there are signs of weakening shale production, with output shrinking to less than 100,000 bpd during the first seven months of the year, compared to a 600,000 bdp increase during the same period in 2018. 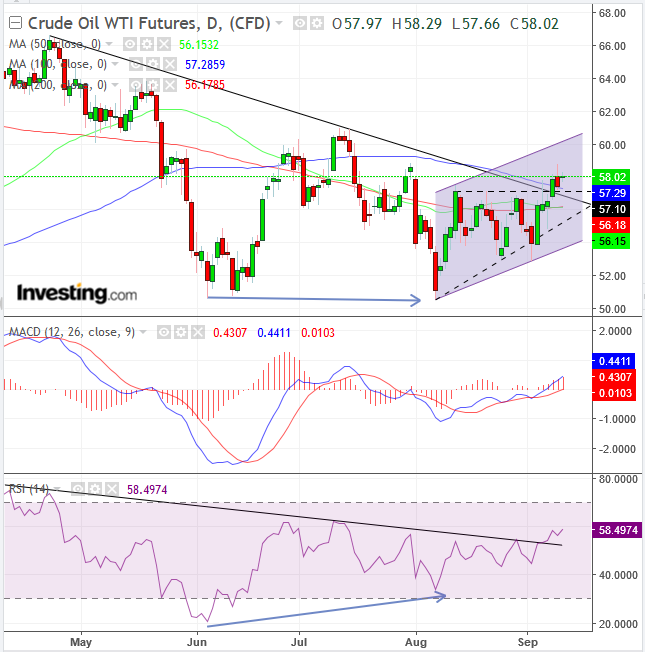 Despite the drop in the oil price following the news of Bolton's departure, prices remained above both the downtrend line since April and the 100 DMA. Right now, prices have rebounded from a dip and are in positive territory.

The trading pattern since the August low has developed a small ascending triangle, whose rising lows demonstrate over-eagerness relative to the flat supply at the pattern top.

The 50 and 200 DMAs are intertwining, as the decline from October 2018 and the rise since December 2018 wrestle for trend dominance, with explosive potential.

The MACD is providing repeated buy signals after a series of bounces of the short MA on the long MA, moving it back above the zero line.

The RSI is demonstrating that momentum supported the price breakout, after providing a positive divergence when it rose from June to August while the price languished.

As of now, the short-term trend is up, after establishing two rising peaks and troughs from the August bottom, while the medium-term is sideways.

Conservative traders may wait for the price to fall back toward the channel bottom above the downtrend line since April.

Moderate traders might risk a position upon any return to the channel bottom, after it finds support.

Aggressive traders may enter a long position now, relying on the support of the downtrend line since April and triangle top.