The US Federal Reserve won’t be implementing yield curve control anytime soon, if the minutes of the July meeting released Wednesday are any indication.

A “majority” of participants got into the discussion in July after the Federal Open Market Committee toyed with the idea in June and asked the staff to do more research. In the July meeting, then, what had been a cool reception turned into an outright rejection.

“Many participants judged that yield caps and targets were not warranted in the current environment,” the minutes concluded. Policymakers feel that the Fed’s forward guidance on rates—they will stay near zero for a long time—has convinced the markets and is keeping long-term rates low.

Besides, there are costs and risks associated with controlling the yield curve, which entails buying bonds to cap or steer yields as required. Such a policy could lead to a too-rapid expansion of the balance sheet. Also, it would be difficult to figure out how to communicate a change in the policy and might muddle the message about where short-term rates are going.

Fed economists grew more downbeat about the economy between the early June and late July meetings. The second-half forecast for GDP growth and decline in unemployment was “less robust” than the previous forecast, according to the minutes.

The staff economists added darkly that, given the uncertainties from the pandemic, “a more pessimistic projection was no less plausible than the baseline scenario.” This alternative scenario pictures an acceleration in the coronavirus outbreak and another lockdown later this year, leading to a decrease in real GDP, a jump in unemployment, and renewed downward pressure on inflation next year. All this would dampen economic performance in the medium term. 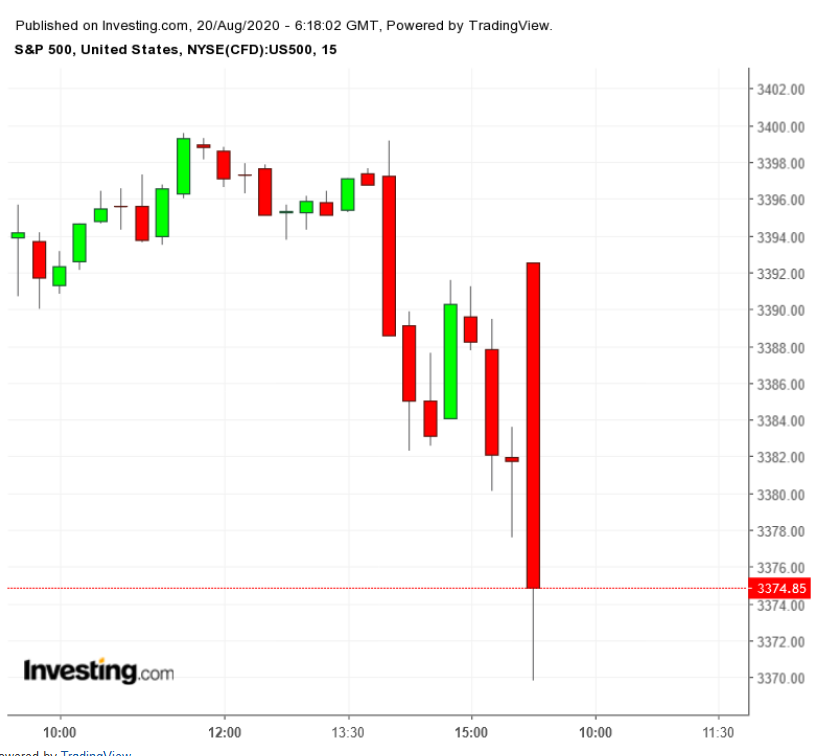 The economic pessimism in the minutes reversed stock market gains, while the rejection of yield curve control dampened Treasury prices.

The dimmer outlook for the economy also lessened policymakers’ enthusiasm for shifting the guidance on interest rates. They went from considering clarification of their intentions as desirable in “upcoming meetings” to now suggesting they might want to clarify intentions “at some point.”

The Fed kept up its purchases of Treasuries and mortgage-backed bonds in the period since the June meeting at the same $120 billion a month rate. At the July meeting, “many participants” spoke in favor of highlighting the accommodative nature of the purchases, which were initially launched to stabilize markets, confirming a return—though they did not use the term—to quantitative easing.

The policymakers discussed linking any future shift in guidance to a specific outcome, such as thresholds in inflation or unemployment, or both, perhaps in combination with a calendar date.

All these considerations are grist for the mill as the FOMC mulls the revision of its Statement on Longer-Run Goals and Monetary Policy Strategy to provide an overarching framework to guide policy actions and communications.

Missing from the minutes, however, was discussion of easing the inflation target of 2% even from its current “symmetric” stance—tolerating a period above the target to balance out the time below—to an even looser approach seeking an average inflation of 2% over time.

Market participants are expecting some indication of the shift, perhaps as early as the September meeting. At present, policymakers don’t see inflation getting near 2% anytime soon, so a commitment to boosting inflation might need further accommodation.