Investors are facing a couple of quandaries triggered by the rise in government bond yields. The move is putting pressure on them to look for answers.

Quandary No. 1: The prospect of a robust economic recovery in the second half, with or without a government stimulus, is leading to a selloff in U.S. Treasuries and other government bonds.

As a result, yields are rising across the board (yields move inversely to prices). But these rising yields make bonds more attractive and increase the prospect of central bank action to raise rates—both of which spell bad news for stocks.

Quandary No. 2: Another reason bond yields are rising is that investors are starting to worry about inflation picking up again, and they want yields to reflect that concern.

Policymakers at the Federal Reserve don’t seem to share these worries, and keep protesting (too much?) they are going to hold rates at rock bottom. Deflation is still as big a worry as inflation, they say. More important right now, according to Fed officials, is reducing unemployment. That means not only bringing down the headline rate but ensuring that the decline benefits workers across all sectors.

But inflation expectations have risen above the Fed’s 2% target and one traditional harbinger of higher inflation is expectations becoming untethered.

What are investors to do in the face of these quandaries?

For the moment, they don’t seem to know. Treasury yields continued to rise on Monday, with yield on the 10-year benchmark nearing 1.4%, its highest in a year, compared to 0.9% at the beginning of the year. The stock market, as measured by the S&P 500 continued its bumpy downward slide and the NASDAQ declined even more, while the Dow Jones cut its losses and eked out a small gain. 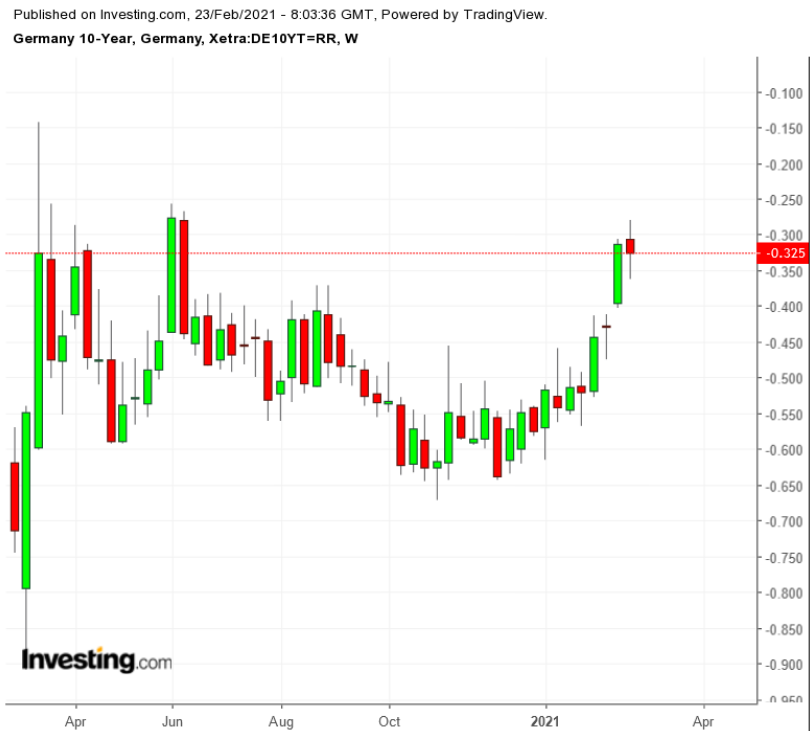 In Europe, the yield on Germany’s 10-year benchmark bond, which doubles as a benchmark for the European Union as a whole, has continued to rise, hitting just below minus 0.33% after starting the year at minus 0.60%.

European Central Bank President Christine Lagarde said Monday the ECB will be keeping a wary eye on bond yields, especially at the long end of the market, to keep economic recovery on track.

Her remarks brought yields down on German and French government bonds (and enabled stock markets to cut their losses) because she can back up her views with the ECB’s virtually unlimited ability to buy bonds.

“Economists, even those who have long supported a big fiscal push, are saying be careful. Going big may be too big.”

“Going big” is of course the mantra being pushed by Treasury Secretary Janet Yellen, the former Fed chair, as she promotes President Joseph Biden’s $1.9 trillion fiscal stimulus plan. Many analysts are pushing back, claiming it is too big, too costly, and maybe not even necessary.

Democrats in the House and Senate are pledging to pass the package by Mar. 14, when jobless benefits expire for 11 million people. But some Democratic senators are hedging on their support for some provisions and the party needs all 50 on board to force a tie vote from Vice President Kamala Harris against Republican opposition.

Fed Chairman Jerome Powell is due this week for his semiannual testimony in both houses of Congress, and investors worry that he will come across as too hawkish and hint at tightening money, or, maybe even worse, appear too complacent about the rise in bond yields.