One of the best-performing currencies today was the Australian dollar. AUD jumped nearly 1 percent against the U.S. dollar to its strongest level since November 20. On a technical basis, this move goes a long way in nullifying the downtrend but Australian data is weak on a fundamental basis so its hard to trust the rally.

According to the latest economic releases, manufacturing activity contracted in the month of November, job ads fell further, inflationary pressures eased and building approvals fell much more than expected – in a nutshell every single one of these numbers showed further deterioration in Australia’s economy. Yet the currency soared because Chinese data beat expectations with Caixin reporting unexpected strength in China’s manufacturing sector last month. Despite trade tensions, this private-sector report showed manufacturing activity growing at its fastest pace in 3 years. This validates the improvement reported in the government’s official November PMI report. AUD/USD was also helped by President Trump’s criticism of the strong dollar and call for the Fed to lower interest rates. Trade negotiations are moving forward as well with Trump saying China wants a deal, but we’ll see what happens. Phase one of China’s deal is being written up according to senior White House advisor Kellyanne Conway but according to Secretary of Commerce Wilbur Ross, if a deal is not reached, Trump will raise tariffs. A decision to impose, delay or suspend the December tariffs still needs to be made so for now, headlines will drive FX trades.

However for the Australian dollar in particular, there’s a monetary policy announcement and a number of important economic reports scheduled for release. As shown in the table below, there’s been more weakness than strength in Australia and China’s economies since the last Reserve Bank meeting. In November, the RBA said not much had changed from 3 months ago. Wage growth is weak, the timing of consumption recovery is uncertain and GDP growth next year will be weaker than they previously anticipated. The minutes revealed that a month ago, they felt that the case could be made to ease and while they felt that the most appropriate approach was to hold rates, they are prepared to ease monetary policy further if needed. RBA Governor Lowe who spoke last week wasn’t particularly optimistic – he said employment growth will slow and it's going to take a long time for inflation to pick up. This view may be a reflection of the setbacks in the economy since early November. 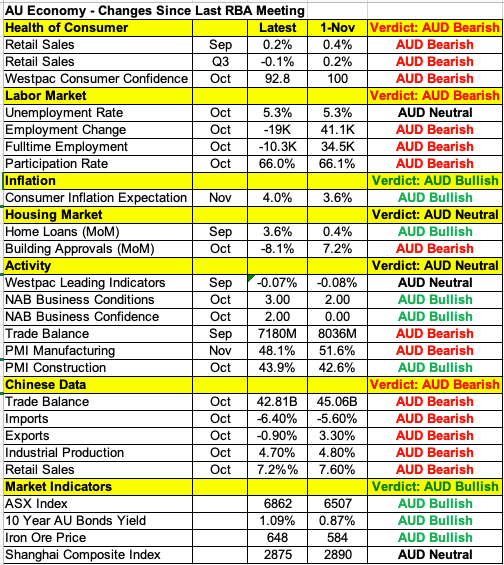 If the RBA is cautious like we expect, AUD/USD will curb its gains but as we’ve noted, nothing matters more now than U.S.-China trade relations. If the monetary policy statement is benign, AUD/USD could trade sharply higher. USD/JPY also fell sharply Monday on the back of Trump’s comments, trade uncertainty and U.S. data. Manufacturing activity contracted further in November, casting doubt on the strength of the U.S. recovery and sustainability of the record-breaking moves in equities. Broad-based dollar weakness was the primary theme of the day.