A 17% price jump in a day has got natural gas bulls counting on a continued rally this week, and volatility players excited about a potential return to the market’s "Wild West" days.

But the US utilities that rely on gas as the primary fuel for power generation could cool the current upside for gas futures on the New York Mercantile Exchange’s Henry Hub by burning more coal instead.

Gas-to-coal switching and back is a common game in US power generation. Such fuel substitution depends not only on gas prices but also on generator business models.

Merchant generators, which operate independently and compete to sell power, are the most responsive to fuel prices and also the most likely to switch away from coal when gas prices are low.

Fuel Switchers May Use More Coal In Late August

Just at the start of this year, as natural gas on NYMEX’s Henry Hub hovered at $1.85 per million metric British thermal units, there was talk of a potential wave of coal-to-gas fuel switching by US generators that could provide unexpected support for summer prices. With front-month gas on the exchange hitting nine-month highs of $2.26 per mmBtu on Wednesday, the reverse could be contemplated. 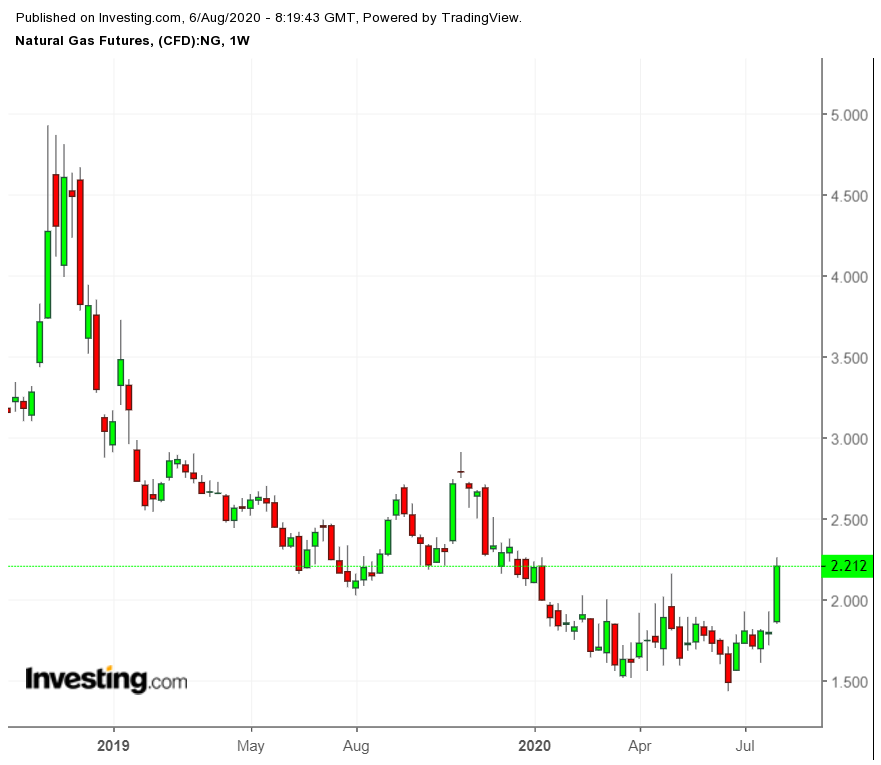 “Fuel switchers on the margin will begin to move back to coal and reduce peak gas demand when hot weather hits later this month,” Daniel Myers, analyst at Houston-based Gelber & Associates, told clients of the gas risk consultancy in an email on Wednesday that was sighted by Investing.com.

“Given how crucial maxed-out fuel switching and record power demand has been to tightening market balances this summer, any reduction in demand [would] quickly be felt and serve to temper the current rally."

The debate on fuel switching comes ahead of weekly data on US natural gas balances due at 10:30 AM ET (14:30 GMT) from the Energy Information Administration. Analysts expect the EIA to report that 30 billion cubic feet was added to gas in storage during the week to July 31, after the 26 bcf injection in the previous week to July 24.

Weekly injections of gas into storage have fallen below the triple-digit mark over the past five weeks, since the EIA reported a 120-bcf addition during the week to June 23.

Gas Stockpiles Could Surprise Either Way

The notion that gas stockpiles will start the 2020/21 winter at a seasonally-low level helped Henry Hub gas futures to return to $2-and-above pricing this week. Although the market remains down 37% on the year, it is up 23% for August alone, making it the best start to a month that gas bulls have had since November 2018.

Speculation gas storage could surprise either on the low or high end has also brought some volatility back to the market, once known “Bronco Billy” or “Wild West” of commodities. For instance, Henry Hub futures plunged 13% price in November 2019, reversing a similar gain in October. In December 2018, the market dove 36% after a 41% gain the prior month.

Naturalgasintel.com addressed the gas storage situation and the possibility of gas-to-coal switching in a blog it issued on Wednesday, citing data from analysts at Tudor, Pickering, Holt & Co.

The blog said TPH analysts were modeling a peak of 4.05 trillion for gas in storage, which they said created some “breathing room” for utilities, although regional balances in the US East and Midwest could surprise.

“If the market is willing to write off storage risk for the balance of summer, we could still see an additional 40 cents or so of upside at the front of the strip to take some of the record contango out of the curve,” the analysts at Tudor, Pickering, Holt & Co said in the blog.

“We’re not quite ready to completely write off storage risk just yet, particularly as pricing strength begins to draw more coal back into power generation. However, with risk dropping by the week, we expect pricing likely continues to grind higher but with ample volatility as storage concerns ebb and flow.”

At Current Pricing, Some 25 GW Of Power At Risk For Switching

At gas prices ranging from $2.30 to $2, there is roughly 25 gigawatts of coal-fired power "at risk" for fuel switching, Platts Analytics data showed. Accounting for average capacity factors by generator type, as well as the regulatory and market environments faced by each generator, the amount of coal-fired capacity reasonably "at risk" sinks to just 4 GW—equivalent to roughly 700 to 800 million metric cubic feet per day in replacement gas demand.

At gas prices ranging between $2 to $1.70, a comparable amount of coal-to-gas switching would likely result, providing an additional 700 to 800 million metric cubic feet per day in replacement gas demand.

For now, gas bulls appear content to stick with their longs, maybe even double down on them.

“Being long spreads still remains the best way to play this in my view as it would not shock me to see the back end of the market struggle in both directions due to producer flows,” said Scott Shelton, energy futures broker at ICAP in Durham, North Carolina.