The Corn And Energy Price Link Could Tighten As U.S. Election Looms

The Corn And Energy Price Link Could Tighten As U.S. Election Looms

Ethanol is a biofuel. In the United States, corn is the primary ingredient in the refining process. In Brazil, sugar cane is the input. The US is the world’s leading producer and exporter of corn, while Brazil is the top producer of free-market sugar. The two countries lead the world in ethanol output using excess agricultural commodity production.

Over the past years, corn’s role in US ethanol production served two purposes. Increased demand for corn was supportive of US farmers. At the same time, an ethanol blend in gasoline is supposed to be environmentally friendly, and it reduced dependence on crude oil from the Middle East.

Corn and ethanol share a bond in the US, as each can impact the other’s supply and demand fundamentals. The price of ethanol followed oil and gasoline prices lower during the massive selloff in February through April. Both ethanol and gasoline futures fell to lows in late March. Since then, the biofuel and the oil product have made significant comebacks.

After trading to a low of negative $40.32 per barrel on April 20, the price of nearby crude oil futures on NYMEX was over $80 per barrel higher at the end of last week, at above $41 on the active month August contract. Natural gas hit a low of $1.432 in late June and recovered to $1.718 on Friday, July 17. The ethanol price moved higher with the energy commodities. 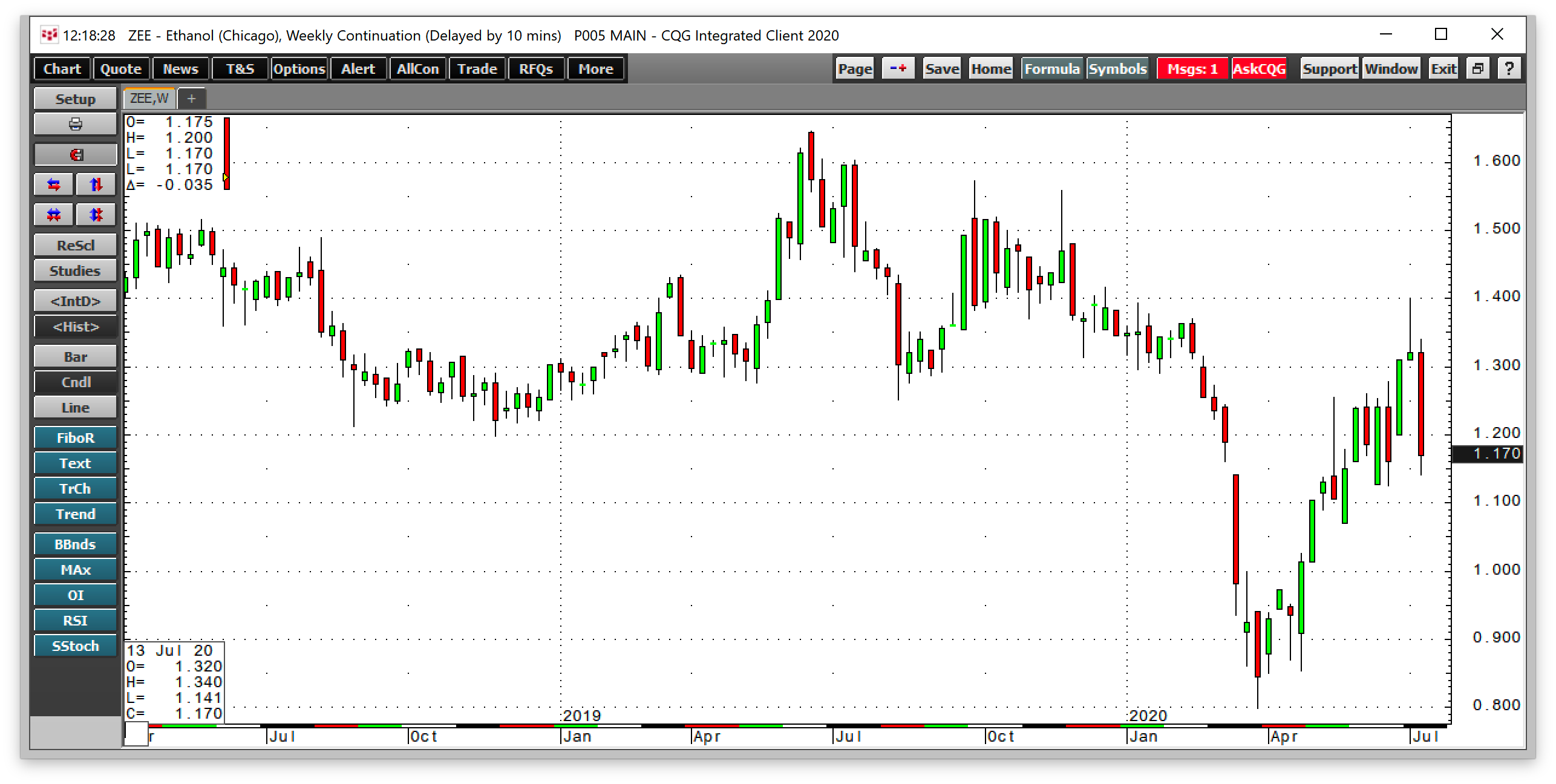 The weekly chart shows that nearby ethanol futures rose from a record low at 79.9 cents per gallon during the final week of March to a high of $1.40 on July 10. The price pulled back to the $1.17 level at the end of last week, which was still 46.4% higher than the record low.

The ethanol futures market tends to follow energy prices, but it is also highly sensitive to the price action in corn futures. 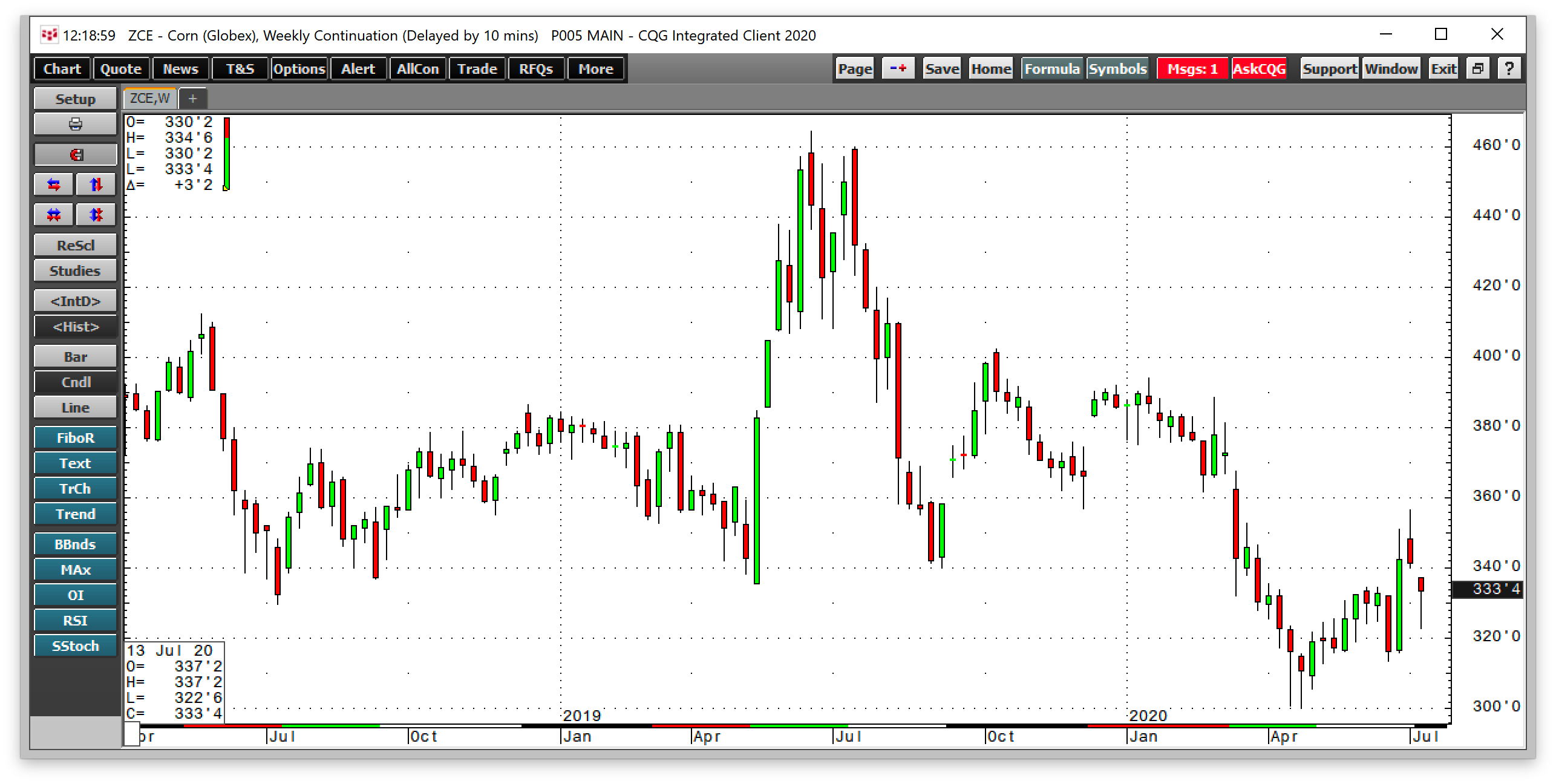 The weekly chart illustrates that nearby corn futures hit bottom for 2020 at $3.0025 in late April. A recovery took the price of the coarse grain to a high of $3.5650 earlier this month. At $3.3350 at the end of last week, corn had recovered from the low by 11% as the input into ethanol production underperformed the biofuel.

Refiners who process corn into ethanol have benefited from the differential as the price of the input, corn, rose less than the output, ethanol. Companies like Archer Daniels Midland (NYSE:ADM), Bunge (NYSE:BG), and some oil refining companies saw their margins improve as corn underperformed the price action in the ethanol market on a percentage basis.

The US election in early November will determine the path of energy policy in the world’s leading oil and gas producing nation. President Trump favors energy independence and a continuation of the production of fossil fuels. The challenger, former Vice President Joe Biden, supports the “Green New Deal,” which could limit or eliminate the production of hydrocarbons starting in 2021.

The bottom line is that the vast gap between the candidate’s platforms could lead to increased volatility in energy prices over the coming weeks and months. The fundamental supply and demand equations for crude oil, natural gas, and ethanol could change dramatically on the back of US energy policy.

Fasten your seatbelts, the wide variance in the energy markets during the first half of 2020 is likely to continue for the rest of this year. When it comes to ethanol, energy and corn prices will continue to determine the path of least resistance for the biofuel.