Week Ahead: Sino-U.S. Clash To Roil Stocks; Dollar To Slip As Gold Gains

Week Ahead: Sino-U.S. Clash To Roil Stocks; Dollar To Slip As Gold Gains

For the first time in a month, US markets finished lower for the week as an old market theme resurfaced: diplomatic fallout between the US and China. The rising tensions between the two trading partners will undoubtedly drive markets during the coming week of trade.

On Friday, the S&P 500, Dow Jones, NASDAQ and Russell 2000 all slumped for a second day as the scenario for a new cold war between the world's two largest economies continues to escalate. The BBC characterizes current relations between the US and China as having gotten to “their lowest point in decades,” and the New York Times says the two countries are heading “toward [a] point of no return.”

The VIX jumped. Yields remained near record lows, and the dollar extended a selloff, while gold topped $1,900.

Stocks didn’t just retreat from a weekly gain this past Friday. As well, after the S&P 500 index briefly climbed into positive territory for the year, geopolitical tensions helped pull the benchmark index back into the red.

The lastest Sino-US spat accelerated after China ordered the US to shut its Chengdu Consulate in retaliation for the US ordering the closure of China's China’s consulate in Houston on Thursday.

Of equal concern, confirmed COVID-19 cases continue to rise, both globally and in the US. More than 4 million cases have now been reported just in the US, with 18 states setting single day records during the week. On the economic front, initial jobless claims climbed last week for the first time since March—when equities bottomed out—pointing to a faltering recovery and raising concerns it's beginning to stall. About 30 million workers are already collecting jobless benefits.

Now, the big question is whether there will be another shutdown on expanding coronavirus outbreaks. And if there will be, how would it impact the V-shaped recovery theory?

Currently, Florida, Texas and other hot spots have delayed reopening their economies. If the outbreak could be contained to pockets of local outbreaks across the country, it is less likely there will be another national lockdown. However, if the outbreak spreads across the US, expect the world’s largest economy to be brought to its knees.

So, what will the market do next? As we've said before, we don’t know. First, this isn't a real market. It’s being fueled by funny money, with global central banks currently monopolizing the funding spigot.

We're experiencing the worst global pandemic in a century, the sharpest recession in 70 years, plus in March we witnessed the fastest plunge into a bear market in history. Yet all of this was followed by the best quarter for stocks in decades. Equally astonishing, markets are back to levels seen before the virus hit.

Of course any bit of news claiming progress on a coronavirus vaccine catapults stocks higher, even if the realities regarding global innoculation aren't exactly clear. Some experts say a vaccine wouldn’t necessarily be able to stop a mutating virus, even if one currently existed. In addition, it's not obvious that most of the world population would have access to it, given the complexity of distribution logistics.

Still, with all that uncertainty, and the US-China threat to global commerce, if the Fed made another announcement increasing their level of stimulus, investors who've forgotten what its like to trade in a real market would obediently increase their risk positions.

Nevertheless, the European Union agreed on a landmark stimulus package early last week, the world’s largest. The EU will provide 750 billion euro, to help member states mitigate the economic downturn caused by the pandemic, yet the STOXX Europe 600 Index closed lower for the week. 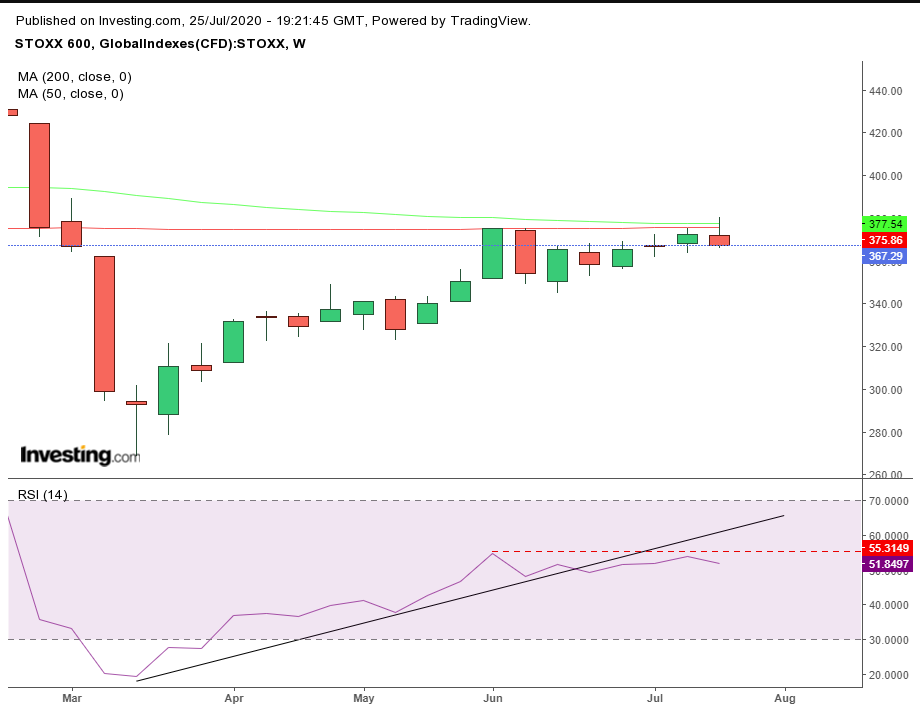 The pan-European benchmark developed a weekly shooting star that confirmed the Bearish Piercing pattern by the resistance of the 200 weekly MA. The 50-week MA fell back to the 200 week MA, the closest its been to triggering a death cross since it did so during October 2016. The weekly RSI is also losing strength. 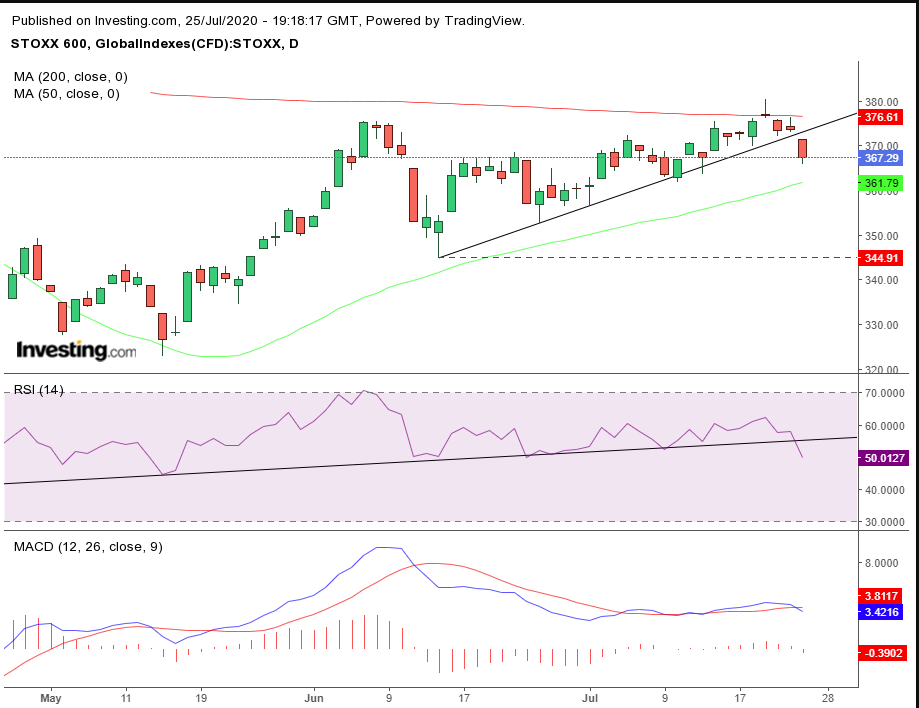 On the daily chart, the European benchmark gapped down below its uptrend line, after a shooting star on top of the 200 DMA last week topped out at the June highs, putting in play a double-top. The RSI and MACD both triggered bearish crosses.

Despite the generous stimulus, European stocks closed lower. Would US investors now react similarly to additional Fed stimulus? Only time will tell. 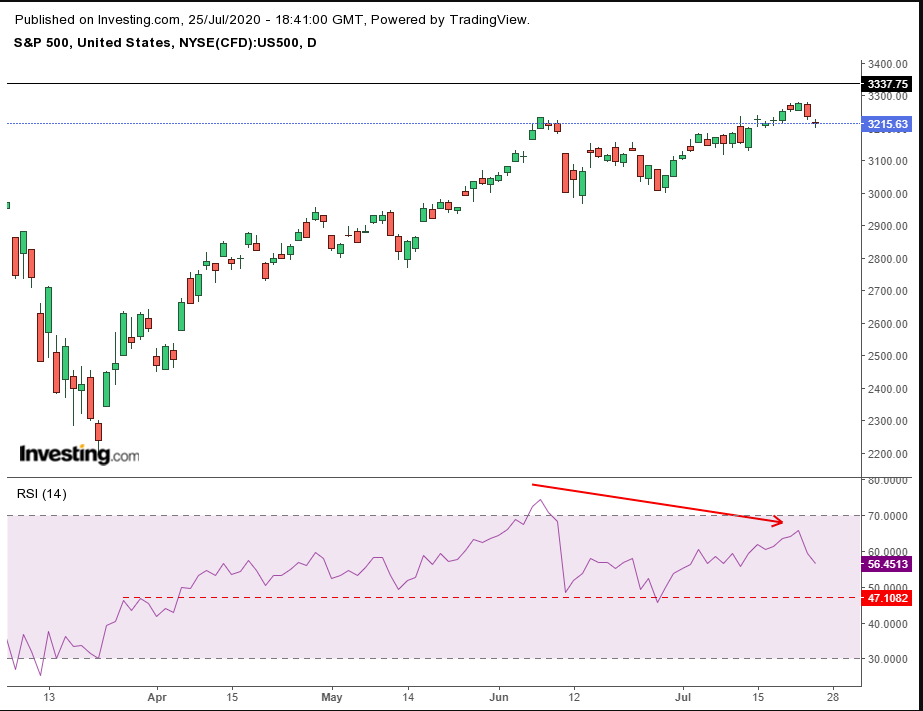 Last week’s S&P 500 trading developed a shooting star following a hanging man at the resistance of the Feb. 24 falling gap.

The RSI projected a negative divergence, as momentum dropped against the rising price. The RSI may also be forming a H&S top, as the price, like that of European stocks, sets up for a double top, with the 200 DMA marking its neckline. 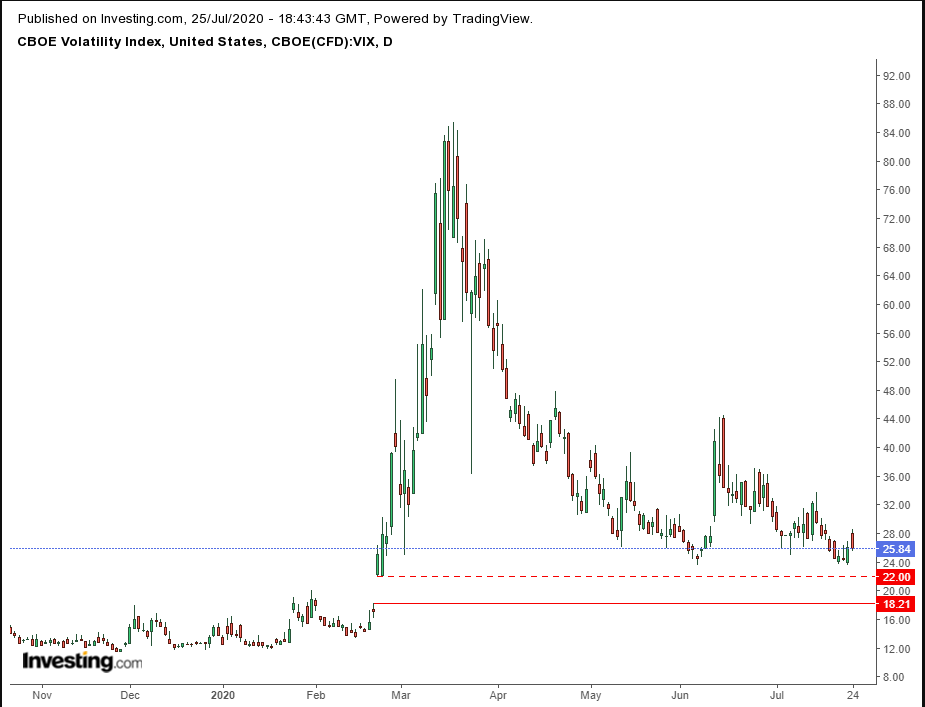 The VIX jumped on Friday, after nearing the rising gap, in mirror image of the S&P 500’s falling gap. 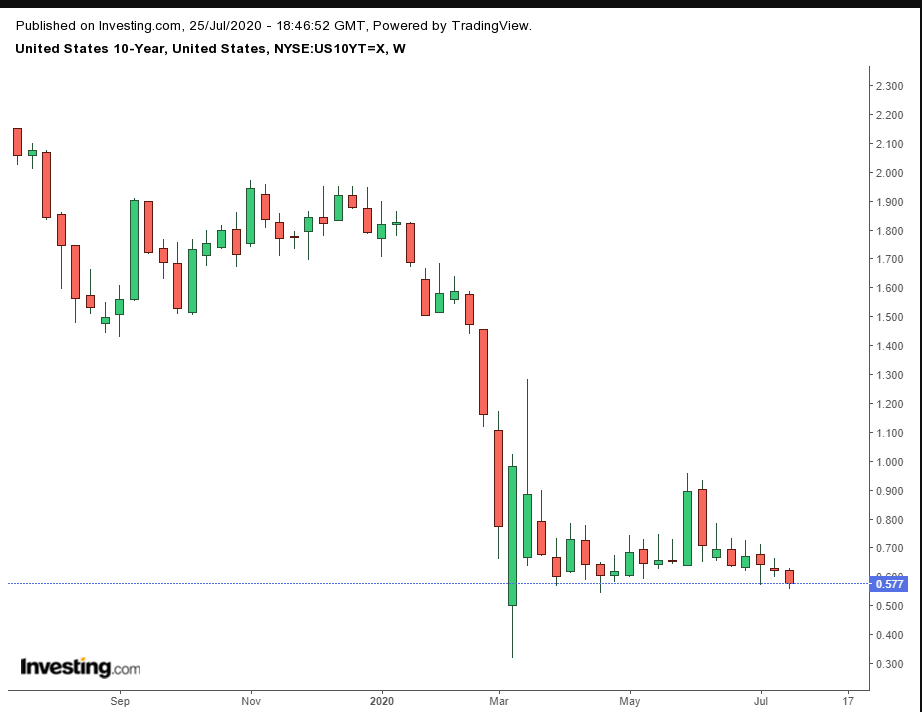 While edging higher Friday, on a weekly basis, yields, including for the 10-year Treasury, closed at the lowest level in history. 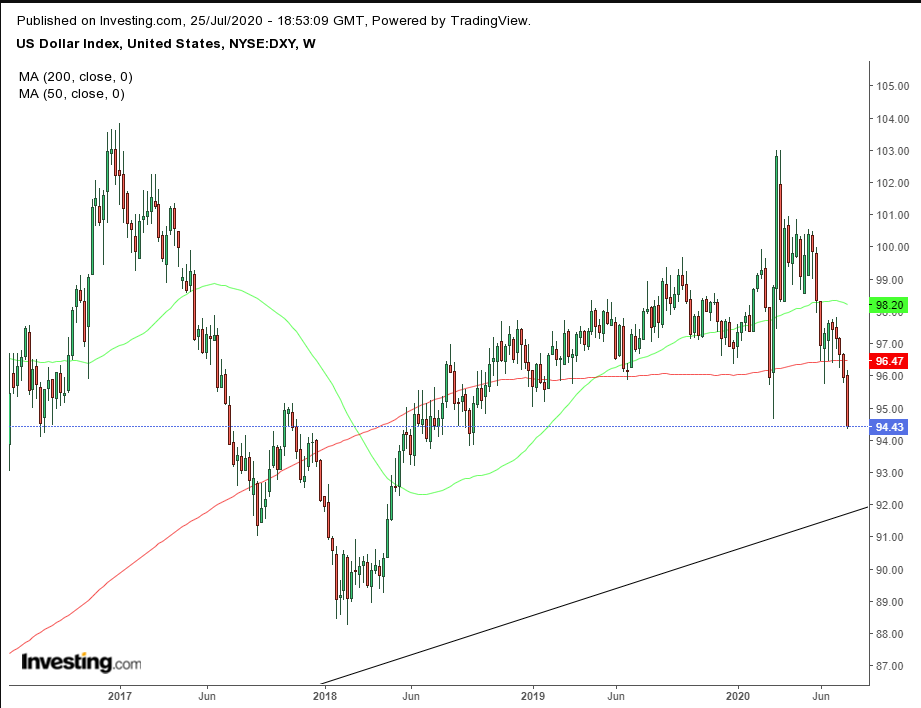 The greenback has also been dropping for five consecutive weeks. It now has its first full candle—and a long one, for that matter—below the 200 weekly MA for the first time since December 2017. The USD has reached its lowest level since Sept. 26, 2018.

Gold climbed on Friday for a sixth day, briefly breaking above the $1,900 level for the first time since 2011. 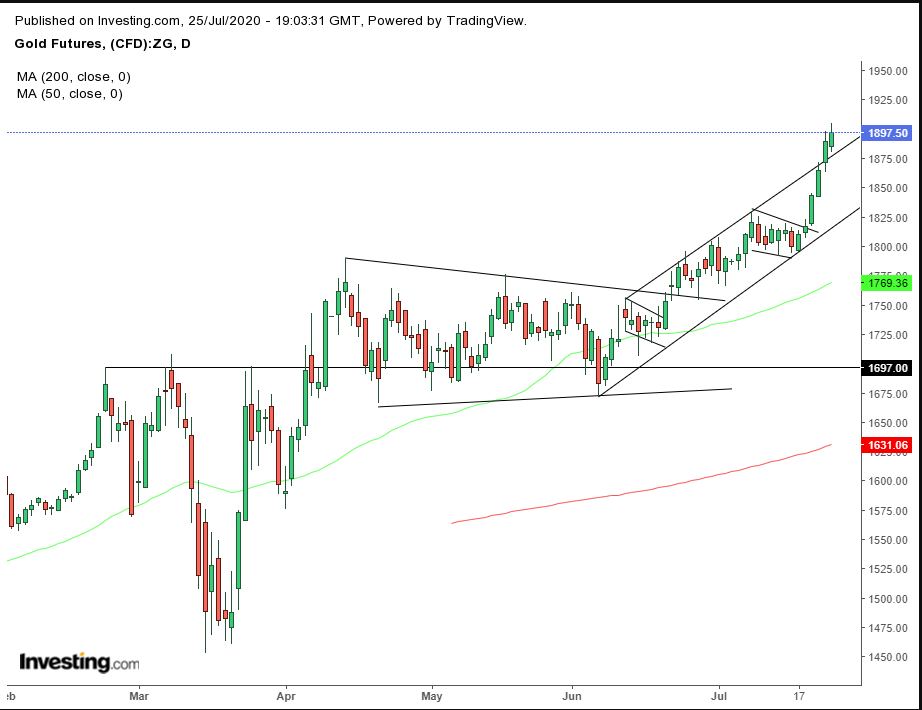 It closed at $1,897.50, a new record close. The safe haven yellow metal is being buttressed by a weak dollar, assisted by near-zero rates and boosted overall by a worse-than-expected recession, completely contradicting the risk-on message seemingly being sent by equity highs.

Gold has a runway to move higher as well, based on the implied target of the H&S that developed from February through April. Plus, its second day high, above the top of its rising channel, turns the former resistance to a support. 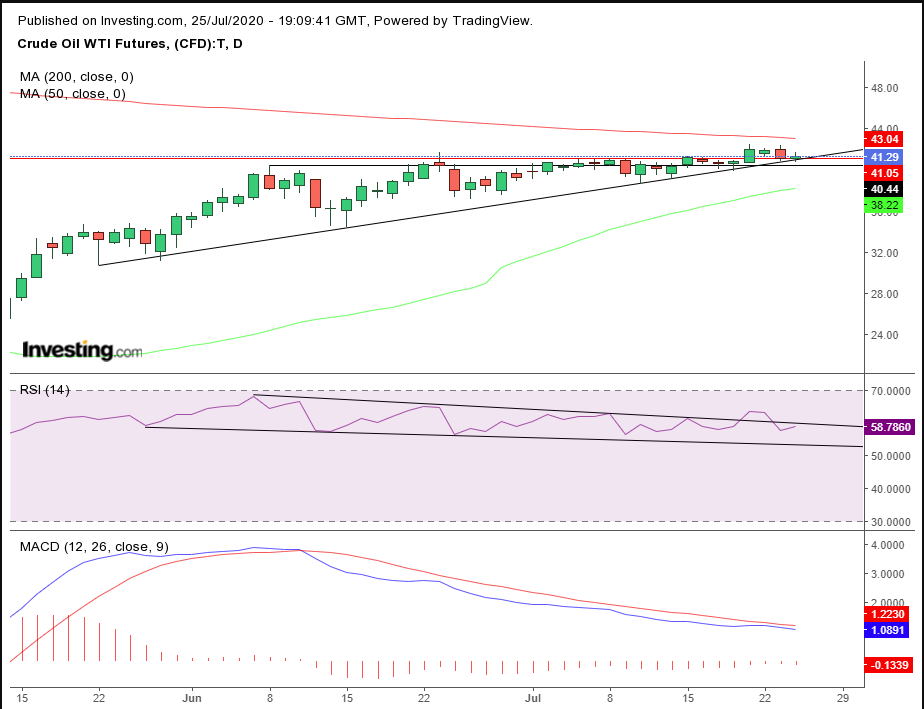 WTI demonstrated a support that was created when bulls managed to break the resistance (red line) of perhaps the biggest falling gap in the commodity’s history, when a quarter of its value was wiped out on March 9.

Note Thursday’s close. It was two-cents above that resistance-turned-support. While the 200 DMA lingers above, we feel good about oil cutting through it, having completed an ascending triangle, even as the RSI and MACD provided negative divergences.