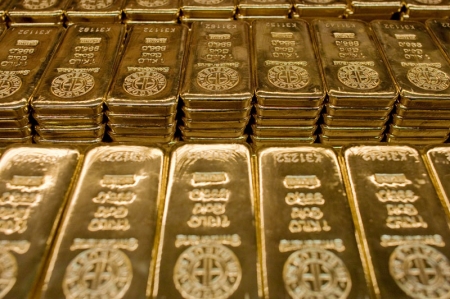 * Gold's trend seems to be to the downside -analyst

Feb 23 (Reuters) - Gold eased from a one-week peak on Tuesday, pressured by a firmer dollar, but held in a tight range as investors turned cautious ahead of U.S. Federal Reserve Chairman Jerome Powell's testimony to Congress later in the day.

Movements in gold are indicative of a "wait and see approach", said OANDA analyst Craig Erlam.

The testimony before the Senate Banking Committee on Tuesday and House of Representatives Financial Services Committee on Wednesday will be Powell's first since President Joe Biden and his fellow Democrats took control of the White House and Capitol Hill. are clearly going to be a number of questions around what (rising U.S. Treasury yields, stimulus and improved economic outlook) would mean for inflation, the Fed outlook and the risks associated with it," OANDA's Erlam said.

Bullion earlier rose to its highest since Feb. 16 at $1,815.63 as the dollar .DXY briefly touched a more than one-month low. However, the U.S. currency has since rebounded and was last up 0.1% against key rivals. USD/

"Gold's trend seems to be to the downside, and there's no indication that it's reversing for now ... until we get a real spike in inflation expectations or a Fed that talks about controlling the yield curve," said IG Market analyst Kyle Rodda.

Rising yields tend to hurt bullion's appeal as an inflation hedge since they increase the opportunity cost of holding the metal.