Gold slips from 2-week high as dollar rises after Fed

Gold slips from 2-week high as dollar rises after Fed 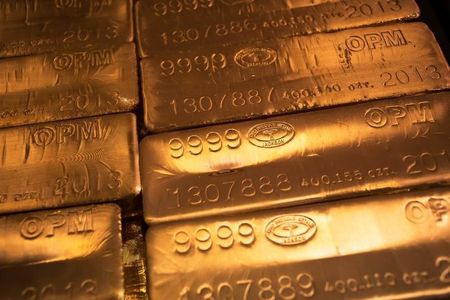 Sept 17 (Reuters) - Gold prices eased on Thursday as the U.S. dollar firmed, although doubts over a swift global economic recovery and the Federal Reserve's pledge to hold interest rates near zero until at least 2023 limited losses for the safe-haven metal.

* The dollar index .DXY rose 0.1% against its rivals, making gold more expensive for holders of other currencies. Longer-term U.S. Treasury yields hit their highest levels this week. USD/ US/

* The Fed signalled on Wednesday it expects the U.S. economic recovery from the coronavirus crisis to accelerate with unemployment falling faster than the central bank expected in June. It also said it would keep rates at near zero levels until inflation is on track to "moderately exceed" its 2% inflation target "for some time." Lower interest rates decrease the opportunity cost of holding non-yielding bullion.