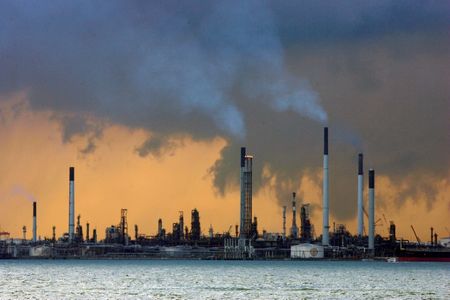 "In my opinion, the most likely event capable of moving the crude oil market to the next level would be the passing of a coronavirus stimulus package," said Bob Yawger, director of energy futures at Mizuho.

"The speed with which the virus is spreading is the main concern for both health officials and financial investors," said PVM analyst Tamas Varga.

Some Midwest U.S. states have seen a 25% jump in positive COVID-19 test rates, and the number of new infections nationwide has grown to 46,000 on average each day compared with 35,000 daily two weeks ago. Energy Minister Alexander Novak said the global oil market had been stable for the past few months, but warned of the risks of a second wave of COVID-19 cases. efforts by the Organization of the Petroleum Exporting Countries and its allies to limit output, more crude is being exported from OPEC producers Iran and Libya. Secretary General Mohammad Barkindo said on Sunday that commercial oil inventories in OECD countries should stand only slightly above the five-year average in the first quarter of 2021, then fall for the rest of the year. one of the heaviest clashes between Armenia and Azerbaijan since 2016 broke out over the weekend, reigniting concern about stability in the South Caucasus, a corridor for pipelines carrying oil and gas to world markets.