Top 5 Things to Know in the Market on Thursday, August 6th

Top 5 Things to Know in the Market on Thursday, August 6th 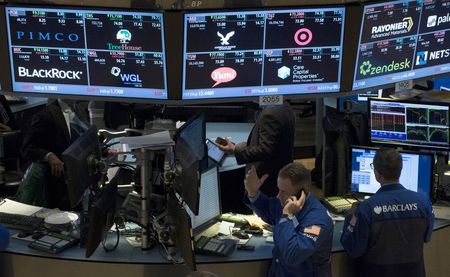 Investing.com -- The U.S. sandwiches in jobless claims numbers between the two big monthly assessments of the labor market. Stock markets are set to open mixed as U.S. lawmakers continue to haggle over the next fiscal support measures. Germany's factories are set to start humming again but European earnings disappoint, and gold and silver march to new highs. Here's what you need to know in financial markets on Thursday, August 6th.

1. Jobless claims due as lawmakers continue to haggle

As lawmakers haggle over the next package of measures to support the economy, the U.S. will release its latest weekly numbers for those claiming unemployment benefits.

Initial jobless claims are expected to have fallen back slightly last week after a two-week blip, although the number of continuing claims is set to remain at acutely high levels.

White House Chief of Staff Mark Meadows said on Wednesday that the two parties remain far apart in their search for a compromise package, adding that “If we don’t have a deal by Friday, I’m not optimistic that more time will get us there.” The White House is reportedly threatening to break the deadlock with executive orders if the two chambers of Congress can’t craft a compromise.

Germany’s recovery is on the way. Factory orders, a generally reliable advance indicator for Europe’s industrial heartland, rose by a record 27.9% in June, far above expectations for a 10.4% gain. There were strong rebounds for the auto industry, and for orders from outside the euro zone.

Orders were still more than 11% down from a year earlier, however.

Elsewhere in Europe, industrial production in Italy also rebounded by 8.2% in June, stronger than the 5.1% expected.

The data cushioned the blow from a generally dismal round of earnings, in which Lufthansa reported its biggest ever quarterly operating loss, Adidas also went into the red, and insurer AXA and commodities trader Glencore (OTC:GLNCY) scrapped their dividends.

U.S. stock markets are set to open mixed, hesitant to extend recent gains against a backdrop of deadlock on Capitol Hill. Wednesday’s coronavirus data, which showed more U.S. deaths than on any other day bar one, are also keeping the pandemic uppermost in many minds.

Today’s big results updates in the U.S. are mainly after the closing bell, coming from T-Mobile US (NASDAQ:TMUS), Booking (NASDAQ:BKNG), Illumina (NASDAQ:ILMN) and Uber (NYSE:UBER). There could also be interest in some Japanese ADRs, with Toyota Motor (NYSE:TM) forecasting a $7 billion profit for the current fiscal year, and Nintendo (OTC:NTDOY) reporting a six-fold increase in profit thanks to the pandemic.

4  Pound gains as Bank of England holds; EM CBs start to run out of road

The Bank of England said the U.K. economy will need at least until the end of 2021 to return to pre-pandemic levels of output.

However, it also said that it now expects the economic decline in the meantime to be a little smaller, in comments explaining a unanimous decision not to make any changes to its interest rates or bond-buying programs at its regular Monetary Policy Committee meeting.

The pound, which was also supported by a stronger-than-expected Construction PMI, strengthened against the dollar and euro,

Earlier, the Reserve Bank of India became the second central bank of a major emerging economy inside 24 hours to warn that it was running out of scope for further interest rate cuts. Unlike its Brazilian counterpart, the RBI held its key rate unchanged. It also indicated it would take a softer line as banking supervisor with regard to banks' non-performing loans.

Turkey, meanwhile, continues to lurch toward a financial crisis, with the dollar rising another 3% to a new record high against the lira.

Commodity markets went back into risk-off mode, with crude oil prices giving up some of the gains they made on strong U.S. inventory data on Wednesday.

By contrast, haven assets gold and silver marched higher, Gold Futures breaking through $2,050 an ounce for the first time ever and silver futures hitting another seven-year high but failing just short of the $28/oz level.

Precious metals remain supported by signs of inflation bottoming out and expectations rising, even as nominal bond yields grind lower.