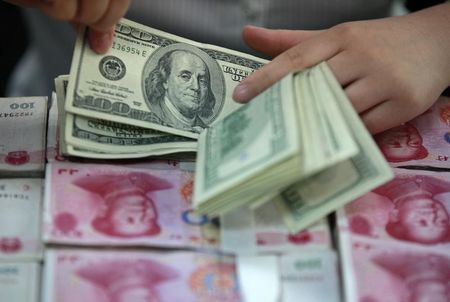 Investing.com - China’s yuan steadied on Tuesday after overnight declines, but market sentiment remained fragile a day after a steep selloff in global markets spurred by fears over the escalating U.S. - China trade war.

China's offshore yuan extended the previous day's declines and briefly weakened to 7.1382, the lowest since international trading in the Chinese currency began in 2010. But it pulled back to 7.0690 after Beijing's firmer-than-expected yuan fixing on Tuesday.

The onshore Chinese yuan fell to an 11-year low early on Tuesday, brushing 7.0699 per dollar.

Analysts saw China's decision as a signal that it will not back down and that a trade war which is already affecting global growth will only worsen from here.

But the Chinese central bank's mid-point fixing on Tuesday of 6.9683 was firmer than market expectations, and the yuan's retreat slowed.

U.S. Treasury Secretary Steven Mnuchin said in a statement on Monday the government had determined that China is manipulating its currency and that Washington would engage with the International Monetary Fund to eliminate unfair competition from Beijing.

"Trump has already hit China with so many tariffs, we're not certain what else can he do now that he's declared China a currency manipulator," said Takuya Kanda, general manager of research at Gaitame.Com Research Institute in Tokyo.

"The trade war has entered a new phase and we are very unsure what comes next. This type of uncertainty will keep the yuan weak and the dollar weak versus the yen."

The Japanese yen, a perceived safe-haven in times of market turmoil and political tensions, touched a seven-month high of 105.53 per dollar before dropping back to 106.37 in volatile trade.

The Swiss franc, another currency sought in times of turmoil, has gained roughly 1% against the dollar this week. It set a six-week peak of 0.970 franc per dollar, before pulling back to 0.9741.

The euro was little changed against the dollar at 1.1206.

--Reuters contributed to this report