(Bloomberg) -- As Asia-Pacific president of Dow Inc (NYSE:DOW), one of the world’s biggest producers of plastics and chemicals, Jon Penrice has 100 billion reasons to recycle.

“About 8 million tons of plastics are going into the ocean annually,” he said in an interview. “If you look at plastic packaging, around 95% is not being recycled each year which is $100 billion worth of plastic, and that’s valuable for entrepreneurs.”

At the center of the effort is Asia, which consumes almost half of the world’s plastic packaging, according to BloombergNEF, and imports even more waste from the U.S. and Europe. Solutions -- such as Indian vending machines that turn plastic bottles into polyester, and researchers in Singapore who are working out ways to clean up oil spills using the waste -- will be needed to meet demand for recycled plastics that’s forecast to rise faster than supply.

The biggest challenge to the transition is to make recycled plastics at a price and quality that are competitive. Virgin plastic is derived from crude oil and is closely linked to the global oil price. Because the cost of recycled plastic is more stable, it becomes relatively more expensive when crude prices fall.

The complexity of sorting different types of plastic is another hurdle, according to Penrice, as well as dealing with waste at source rather than producing a lot of carbon emissions by sending it half way around the world.

An estimated $80 billion-$120 billion of value is lost because of packaging that goes into the environment, said Navneet Chadha, principal operations officer at the World Bank’s International Finance Corp., which helps fund private sector investment in developing countries. “We have to think of used plastic as a resource, not as a waste.”

But Chadha cautioned that standards for recycled products need to be developed to avoid “unintended consequences”. Using plastic in road construction, for example, needs to be evaluated further as microplastics may be generated as the road decays, he said.

Here are some of the ways plastic is being recycled in Asia:

Plastic waste is traditionally reused by collecting and sorting refuse and then melting it, a process known as mechanical recycling. Part of the problem is that a lot of garbage is tainted with food or chemicals and can’t cheaply be turned into high quality raw materials.

“The biggest challenge is quality of recycled plastic,” said Jean-Marc Boursier, chief operating officer of SUEZ Group, one of the world’s largest recycling companies. “Major consumer goods companies like Danone, Pepsi or Coca Cola will not buy recycled plastic unless they are convinced that the quality is as good as virgin plastic.”

SUEZ has nine plants globally that can turn a combined 500,000 tons of waste plastic into 150,000 tons of polymers, used to make shampoo bottles, car interiors and other products. The company is opening its first Asian plastic recycling plant this year in Thailand.

Boursier suggests pricing the carbon savings into the recycled plastic price to take into account the environmental benefit.

A team of researchers at the National University of Singapore has developed a way to convert low-value plastic waste into aerogels -- ultra-light materials used in everything from diaper fillings to cleaning up oil spills.

Around eight average plastic water bottles produce a square meter sheet of aerogel using the method, said Duong Hai Minh, an associate professor at the university who worked on the project. The researchers have sold commercial production rights to firms including Bronxculture in Singapore and DPN Aerogel JSC in Vietnam, he said.

“People throw away plastic because there they don’t see any value,” Minh said. “As long as we can make it valuable, everyone will keep it and sell it.”

Using plastic waste to build roads is gaining in popularity, not least because all types of plastic including difficult-to-recycle multilayered packaging and flexible films and coatings used to wrap chocolates and for food deliveries can be used. Dow Chemical (NYSE:DOW) and India’s Reliance Industries Ltd (NS:RELI) have developed technologies that use this plastic as a binder, replacing some of the bitumen.

The Mukesh Ambani-led company has built 40 kilometers of road at its refineries using plastic that can’t otherwise be recycled, and is in talks with National Highways Authority of India and other road builders about using the technology more widely, said Vipul Shah, chief operating officer for the petrochemicals business.

Meanwhile Indian Oil Corporation Ltd (NS:IOC), the country’s biggest refiner, is trying to get the government to make the blending of non-recyclable plastics in road-laying mandatory, said S.S.V. Ramakumar, director of research and development.

“It’s relatively simple from the technology point of view: you shred the plastic waste, some sorting and selection and then you feed it into the existing asphalt machinery,” he said. “Approximately 100 tons of plastic waste can be recycled into a 40-kilometer stretch of road.”

Shredding plastic bottles to produce polyester for clothing is another technology that’s gaining traction in Asia. Reliance has set up reverse-vending machines that collect used bottles in exchange for discount coupons that can be redeemed at its company stores.

The company, India’s largest petrochemicals manufacturer, can recycle around 2 billion plastic bottles a year, or 33,000 tons, according to Shah. Capacity will be doubled over the next 18 months, he said.

Some non-government organizations and companies are looking at ways to use waste plastic to make bricks and other construction materials. The Global Ecobrick Alliance is promoting use of a block tightly crammed with plastic and other recyclables. Qube, an India-based start-up, has developed a brick made entirely of plastic waste. Called the PlastiQube, it’s cheaper and uses less energy to produce than conventional counterparts, according to the company’s website.

Breaking down waste plastic into a basic feedstock like naphtha -- a process called pyrolysis -- can reprocess dirty, contaminated plastics like detergent drums and mixed polymers that can’t be dealt with through mechanical recycling.

Pyrolysis will provide around 17% of the 19 million tons of plastics recycling capacity required by 2030 in major economies, according to BloombergNEF. Dow will source oil feedstock made using pyrolysis from Dutch company Fuenix Ecogy Group, while Royal Dutch Shell (LON:RDSa) PLC and Total SA (PA:TOTF) have partnered with start-ups to increase use of the technology. 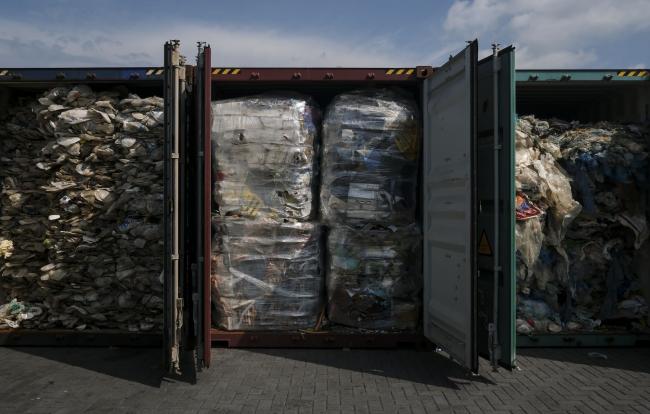