GLOBAL MARKETS-Lockdown blues shove stocks, oil back into the red

GLOBAL MARKETS-Lockdown blues shove stocks, oil back into the red 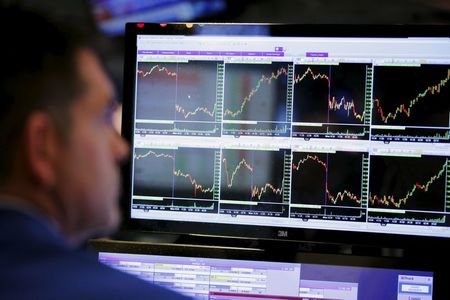 LONDON, Oct 29 (Reuters) - European stocks and commodity markets fell again on Thursday, after a return to national lockdowns in some of the region's biggest economies triggered the worst global selloff in months.

Hopes that the European Central Bank will signal later it has more support to offer and a bounce in Wall Street futures had initially stemmed the rout that had wiped nearly 3% off world stocks on Wednesday, but it didn't last.

The pan-European STOXX 600 .STOXX gave up early gains to fall 0.3% back into negative territory. Frankfurt's DAX .GDAX was headed for an 8% weekly drop, which will be the steepest since the initial COVID panic of March. .EU

Concerns hit commodities, too, with oil falling 4% to its lowest since June at under $38 a barrel and down nearly 10% for the week.

"What I think has changed in the last few days is the significant spikes in the virus in Europe and the U.S., especially the U.S." said Nikesh Patel, Kempen Capital Management's head of investment strategy.

French President Emmanuel Macron and German Chancellor Angela Merkel have ordered their countries back into coronavirus lockdowns, while cases are rising in 47 U.S. states with patients overwhelming hospitals in parts of the country. data and the ECB meeting were the day's other main focus. Uncertainty about Tuesday's U.S. election also kept investors on edge.

The Bank of Japan had made no changes to monetary policy settings overnight, as expected, though it trimmed its growth forecasts to reflect sluggish services spending during summer. expect the ECB to hold off on new measures as well, but to hint at action in December, which is likely to keep a lid on the euro. common currency EUR= fell to a 10-day low against the dollar and a hundred-day low against the yen EURJPY= . It last bought $1.17 compared with $1.20 at the start of last month.

German government bonds, Europe's principal safe-haven assets, were still in demand, with their yields, which move inversely to price, near seven-month lows. Benchmark U.S. 10-year yields US10YT=RR had ticked up overnight to 0.787% but drifted back down to 0.774% in Europe.

"Given what is happening in France and Germany, I think the ECB will talk about more stimulus even if they don't deliver it today," added Kempen's Patel, referring to new COVID-19 restrictions announced this week.

The ECB will release its policy statement at 1245 GMT and hold a virtual news conference at 1330 GMT. OCTOBER RUMBLES ON

Global stock markets lost nearly $2 trillion on Wednesday, with volumes on the New York Stock Exchange up almost 40% to their highest level since September.

Having given up earlier gains, Dow, S&P and Nasdaq futures markets pointed to another bumpy start, though there were also results from some of the big COVID winners such as Apple (NASDAQ:AAPL), Amazon (NASDAQ:AMZN) and Facebook (NASDAQ:FB) to look forward to. .N

Wall Street's "fear gauge", the Cboe Volatility Index .VIX surged on Wednesday to its highest level since June and implied currency volatility indicates that a wild ride is expected. the currency markets, the U.S. dollar edged up and riskier currencies remained subdued.

The dollar, which hit a nine-day high in the previous session, was up 0.3% against a basket of six currencies =USD . The euro was near a three-month low. Japan's yen was steady after the Bank of Japan's subdued message on the economy.