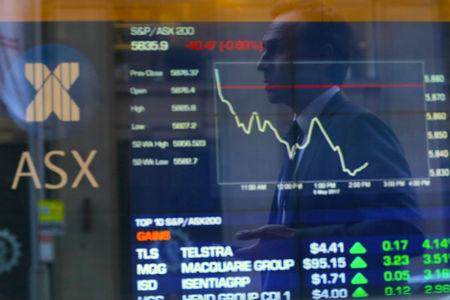 By Pranav A K

March 27 (Reuters) - Australian shares fell on Friday as investors booked profits amid rising coronavirus cases at home, but the index was set for its best weekly gain since 2011 as policymakers launched a raft of stimulus efforts to buttress the global economy.

Federal and state leaders of the country are slated to meet later in the day, as a sharp rise in infections boosted expectations the largest states could enforce a wide-ranging lockdown to contain the pandemic. S&P/ASX 200 index .AXJO was down 1.6%, or 81.70 points, at 5,031.6 by 0152 GMT, having risen 2.3% on Thursday.

The index had gained as much as 2.4% in early trade, in line with global peers, as a spike in U.S. unemployment filings raised bets of even more stimulus.

"The global guys are the buyers boosting markets on the open ... then local guys are selling to lock in profit," said Mathan Somasundaram, a market portfolio strategist at Blue Ocean Equities.

Still, the benchmark has gained 5.3% so far this week, as the Reserve Bank of Australia made a historic foray into quantitative easing and the United States looked all but certain to pass a $2 trillion stimulus package.

"Are we past the worst? Economically we are just getting started, clearly, but equity markets dance to a different beat and it is true that the most vigorous forced selling appears to be over now the Fed has brought out the bazookas," ANZ Research said in a note.

On Friday, the selling was concentrated in mining stocks and financials, with BHP Group BHP.AX dropping 2.7% and the "Big Four" banks sliding between 1.8% and 2.6%.

Even supermarket chains, one of the bright spots during the past few weeks due to the pandemic-fuelled buying frenzy, were not spared. Woolworths Group WOW.AX and Coles Group Ltd COL.AX slipped 2.5% and 3.6%, respectively.

The energy sector .AXEJ dropped more than 2%, pulled down by losses in the country's top oil and gas producer Woodside Petroleum WPL.AX , which fell up to 2.6%. in the day, Woodside said it would defer investment decisions on a number of its major projects, and slashed total forecast spending in 2020. New Zealand, the benchmark S&P/NZX 50 index .NZ50 rose 1.6%, or 154.3 points, to 9,786.7, and was set for its best weekly gain on record.