US equities finished last week by hitting new records and the dollar retested a two year low after the Federal Reserve signaled on Thursday, that it would begin targeting higher inflation, in direct opposition to its previous monetary policy strategy.

According to remarks by Fed Chair Jerome Powell, the central bank will tolerate inflation running higher than the 2% benchmark it's had in place since the Great Inflation of the 70s and 80s, in essence keeping interest rates at historical lows for longer.

The hope is this will encourage spending and investing. And indeed, existing Fed easing appears to have already insured that this will be the best August for equities in 34 years and the best summer of market returns—June through August—since 1938. We're anticipating more of the same this coming week as the rally after the third bear market in two decades continues.

The tech-heavy NASDAQ posted another fresh record on the final trading day of last week, and the S&P 500 registered a sixth consecutive double record—on both a closing and intraday basis. Even the Dow Jones Industrial Average, which remains 3.1% below its Feb. 12 closing record, has turned positive for the year.

Still, equity investors find themselves holding a candle that's burning at both ends—rebounding economic growth but fueled by unprecedented Fed easing—as the central bank extends its accommodative policy, even as economic momentum appears to have improved. On Friday, the monthly personal spending release showed an increase of 1.9% in July, the third straight month of growth.

Overall the US economy rebounded during the last three months, based on signs suggesting it continues to climb out of worst recession since the Great Depression. Indeed, the Federal Reserve Bank of Atlanta forecast 26% GDP growth for the third quarter.

While this sounds promising, it’s important to frame context for this data. Second quarter GDP plunged 32% annually. Still, if the 26% GDP growth estimate is actualized, the economy will have recovered half of the virus induced contraction, rendering the GDP roughly 5% below its pre-pandemic level. That remains a long way off the metrics seen before COVID-19, but admittedly a heck of a lot better than we expected.

The housing market has also been surprising to the upside, with both new and existing home sales each exceeding pre-coronavirus figures dating back to 2006. Consumers have been driving the recovery in additional ways as well:rerouting spending from travel and leisure to durable and other hard goods, propelling July retail sales roughly 1% higher from figures seen in January, when coronavirus seemed like little more than a local problem in China.

But of course, this resilience would likely be impossible without unprecedented policy support, via record low interest rates and direct government aid, which so far seems to have worked as intended. Because of the sizable fiscal support, personal incomes in July were almost $1 trillion higher than in February.

Nevertheless, while retail data has been better than anybody would have expected, business conditions remain challenging. Industrial production is still about 8% below its peak, demonstrating weak demand, even after improving for three months in a row. Surveys reveal expectations are for a solid pace of recovery ahead. But only time will tell if that optimism is justified.

Strong retail but weak business circumstances is ironic, and indeed appears mismatched to the labor market. Unemployment remains high and its heralded recovery has been uneven. Nearly half-a year after a record 6.9 million Americans lost their jobs in March, initial jobless claims continue to come in at more than a million per week, higher than at any time during the Great Financial Crisis following the 2008 crash.

The initial rapid improvement in unemployment was facilitated by the return of the temporarily furloughed workers to their previous jobs when the economy reopened after the March closures. More recently, as activity in large segments of the services economy continues to be constrained, some of the temporary layoffs are becoming permanent (the number of permanently unemployed doubled from February to July), which poses a threat to consumer confidence and the trajectory of the recovery.

Small Caps Could Dominate Into Next Year

Should this scenario play out, it might suggest a relatively better economic recovery for the US than competing economies, conflicting with the reports that Europe is set to overtake the American economy because the continent was better prepared for pandemic, though others see that view as hubris. 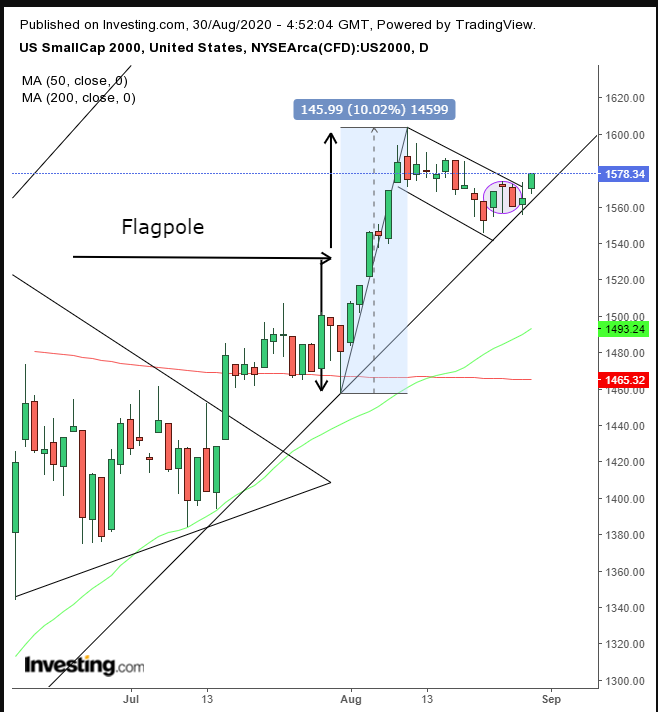 On Friday, buyers broke through the top of the small cap index's flag, bullish after a 10% surge within just eight sessions, seeking more supply at higher prices and rebounding off the bottom of a rising channel. 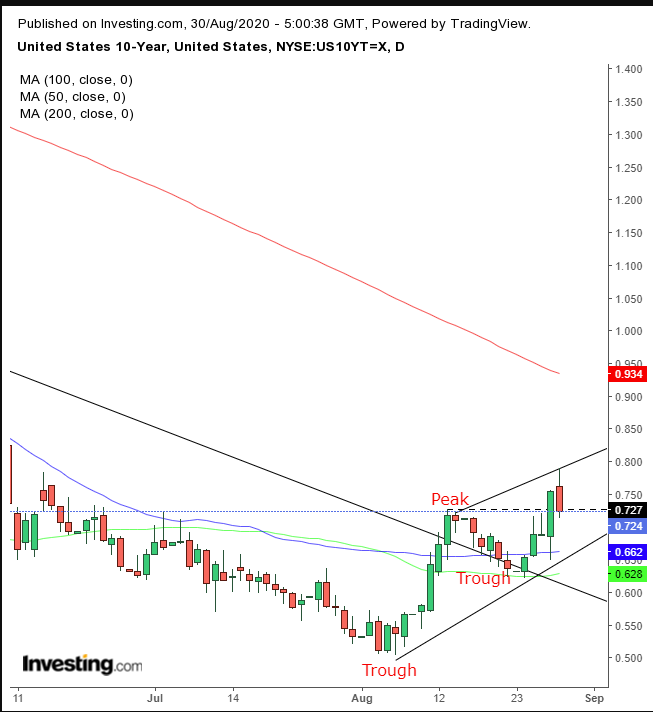 Will yields return to declines after entering a short-term uptrend?

Two bearish fundamentals have been pressuring the dollar: 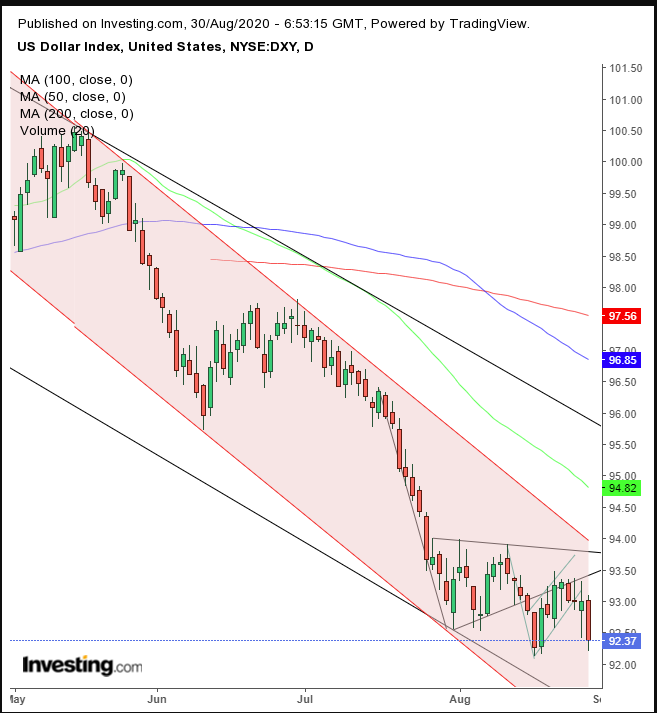 The dollar completed a rising flag, after completing a pennant—two back-to-back bearish patterns—following the preceding sharp drops before each pattern.

With a weaker dollar in the short term, gold demand increased. With the addition of lower rates over the long-term fundamentals for the yellow metal indicate it will continue to be propelled higher. 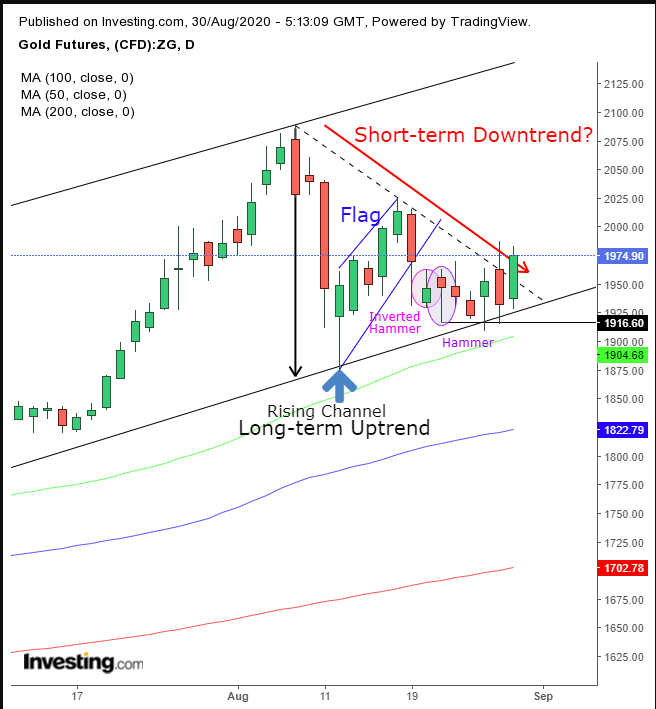 Technically, the price of gold bounced off the bottom of the channel and closed above the downtrend line since the Aug. 7 all-time high. This provided power to the inverted hammer, followed by the confirming bullish hammer of Aug. 20-21, versus the preceding potentially bearish flag, which has yet to be dismantled.

After Bitcoin fell from its (red) uptrend line since July 28, it found support on Aug. 12 at the previous resistance, from late July. 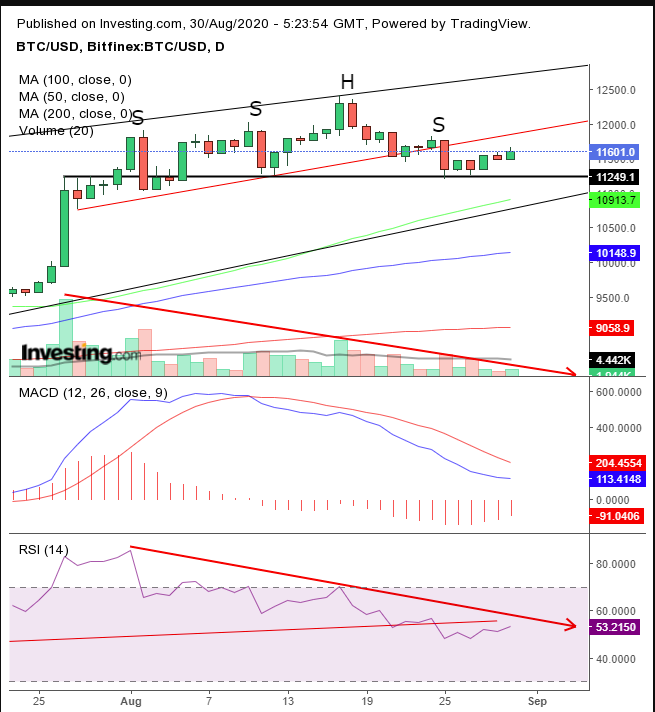 That makes sense. The cryptocurrency’s value should increase at the expense of the rate and inflation sensitive dollar. Also, Bitcoin trends within a rising channel.

However, beware of a potential H&S top, supported by divergent volume, momentum and comparative price averages.

The price of oil fluctuated on Friday as Hurricane Laura dissipated, as it made landfall in the refinery and LNG-rich Gulf of Mexico area. 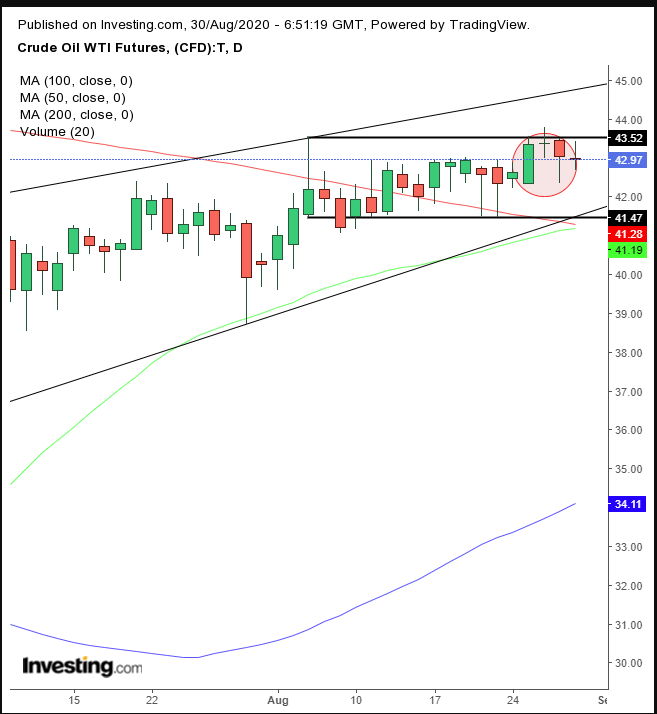 Friday’s lower close appears to confirm what could be an Evening Doji Star as described by strict technical guidelines—the doji’s higher open, followed by the lower close. However, Thursday’s third candle of the pattern’s close didn’t penetrate much of Tuesday’s activity, the first candle’s, close.

Also, the potency of the pattern is expected to be proportionate to the preceding rally, and the price has been moving sideways since Aug. 5, depleting any oomph we’d expect from this bearish pattern. The 50 DMA climbed against a falling 200 DMA, inching toward a bullish cross, triggering a Golden Cross.